As part of the Park’s 90th anniversary, we are publishing a monthly trawl through the archives:

North Lodge Park is laid out on fields originally owned by the Goldsmith’s Company of London. The fields were left to the Company by Sir Bartholemew Rede, a Cromer man. He stipulated that any revenue was to be used to fund a school for boys. The Goldsmiths’ Company built the Lodge, a considerably smaller building than at present, in 1837.  Its main use seems to have been as a lodging house.

In 1857 the Lodge and its grounds were leased to Joseph Hoare, a member of a prominent local banking family. Hoare used it as a “summer residence”, and acquired the freehold in 1895. The Lodge and grounds remained in the ownership of the Hoare family until 1928, when following the death of Douro Hoare, his widow put it up for auction.

The Cromer Urban District Council purchased North Lodge and its grounds (including Doctor’s Steps Field to the east) on 24th September 1928 for £5,500. Loans were subsequently arranged to cover the cost, and the conversion of the Lodge to offices.

The Park was opened as a public amenity in 1929, but the Council did not move into the Lodge until June 1930, when it had been renovated and electricity and central heating installed.

The grounds of North Lodge had a number of lawns, which were easily adapted for pubic use. On the south side of the Lodge, a putting green was established, while on the north side, there was a clock golf course. In 1930 the clock golf course was converted to flowerbeds. The Council had inherited a number of apple trees, which were not considered particularly decorative. They were replaced by buddleia, forsythia and other flowering shrubs.

Initially, the park was open from 9am to sunset. It was extremely popular from the outset, and local people donated shrubs. District Councillors started a fashion for giving benches. The first bench was given by Mr B. Rust on 6 August 1929. Mr. E. Trollor then gave 6, “as an expression of his appreciation of the park and the benefit his family has derived therefrom”. Perhaps the most unusual gift was the flagpole in front of the Lodge. The original was given by Sir F. Layland Barrett, Bart, and the UDC put a weathervane on top depicting a black crow. Unfortunately, there was “a great deal of public feeling amongst a certain section of the public against the crow design”, and on the night of Thursday 14 April 1932, a miscreant attempted to topple the whole thing by cutting through one of the stays. To restore peace in the community, the Chairman of the UDC personally paid for the new design, a “ship in full sail”.

Not long after the Council had moved into its new home, the Chairman, Daniel Davison died. In his memory, a thatched shelter (still there) was erected in the centre of the Doctor’s Steps field. Mrs Bond Cabbell of Cromer Hall performed the opening ceremony on Wednesday 15th July, 1931.

After the Lodge had been renovated, the old stables for North Lodge were converted into shelters, a tearoom, and public toilets. In 8 February 1932, the Blue Danube Tearooms opened here (now the playgroup building).

During the 1930s, the Council acquired more land and enlarged the Park. The cliffs to the north were purchased in 1932, and just before the Second World War, the Rocket House Gardens were acquired, and a cafe was built at the foot of the cliffs. After the War, ground to the east was acquired and the putting greens extended.

In the years following the War, the Park continued to receive donations from townspeople, particularly from local businessman R. W. Clarke, who gave the boating pond and curved seats at the Park entrance.

The general arrangement of the Park reflects its history of acquisition and donations by many members of the public. There has long been affection for the park and a general wish that it should be a public amenity enjoyed by all. 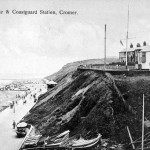 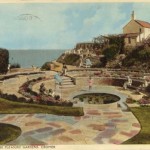