Remembered as ‘Auntie Daphne’ by hundreds of 50-something Cromer people, Daphne Smith has equally fond memories of North Lodge Park from the mid 1970s to late 1980s.

Daphne was working as a nursery nurse at Dr Barnardo’s in London when she met Cromer’s Olive Bolton. “I came here for one summer in 1960 and stayed!”

After three years at the Suffield Park playgroup, in 1975 Daphne became supervisor of the new Seaview playground in the former Blue Danube café in North Lodge Park.

“There was a lot of work to do, and we didn’t have much at the time, but people gave us carpets, new heaters, play equipment – and we had a table tombola outside all summer at 2p a go.”

Initially open four days a week, with local mums helping, Seaview was an immediate success. “We had over 20 children a day, and about 30 on a long waiting list. People put their babies down at birth.”

Daphne ran Seaview until 1988, with many local children enjoying ambulance and hospital visits, even taking a piano apart to show how it worked. But it’s perhaps her story-telling skills – and Daphne’s home-made puppets – that are best remembered.

The finger-sucking tortoise and egg-box crocodile – jaws often stuck together by a toffee – should stir a few memories of her clever creations from everyday items, which also led to several publications including Patterns Puppets & Pieces.

“The elephant came from a grey cardigan I was throwing in the dustbin. I saw the arm and thought ‘there’s an elephant’…” 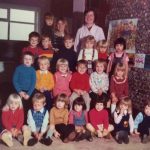 Auntie Daphne and a Seaview group. 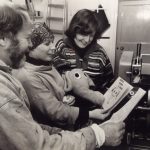 Daphne Smith, right, at the printing of Patterns Puppets & Pieces. She said: “The elephant came from a grey cardigan I was throwing in the dustbin. I saw the arm and thought, there’s an elephant”. 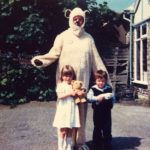 Auntie Daphne in a ‘Goldilocks’ bear costume at North Lodge Park in Cromer. 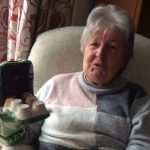 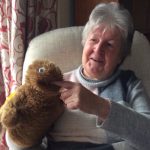 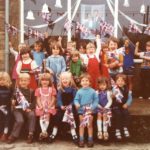 A Seaview group celebrates the wedding of Charles and Di in 1981.

Cromer Council’s meeting on 24 February 1925 responded to a request from Mr A C Bradshaw for a putting green in the town “stating that the Council had no land available for that purpose”.

In February 1961 a preliminary site visit was made to the Rocket House Gardens location for the new Model Village opening at Whitsun.

Elsewhere in Cromer…on 8 February 1962 the Town Council agreed to proceed with a major £8,980 development of Evington Lawns (including Miniature Steam Railway) to be opened before the peak months of the summer season.