Proposals for discussion on the future of the Park

In April 2015 the Friends published a report on the views of the community about the future of North Lodge Park, with a proposal for a second survey to collect detailed responses to more specific plans for the Park.

In August 2015 the Friends were granted a licence for the cafe in the Park and have worked with North Norfolk District Council (NNDC) to bring new life back into the Park. The Friends have been overwhelmed at the strength of support from the community and visitors for the Park, and for the work of the Friends. There is no doubt that the Park holds a very special place in many people’s memories.

Towards the end of 2015 NNDC asked the Friends to propose ideas for improvements to North Lodge Park. The ideas were published in December and the feedback received forms the basis of this report.

Thanks to the 364 people who gave feedback on the ideas proposed; added to the 750 responses given to the first survey over 1100 opinions have been expressed about the Park, showing the Park remains a key focus for the community.

There is overwhelming support for the ideas proposed: over 85% of responses supported the proposals. The message that comes across time and time again is that the community want the Park to be a well maintained safe, community place, with flowers and lawns; a special place of heritage and memories. 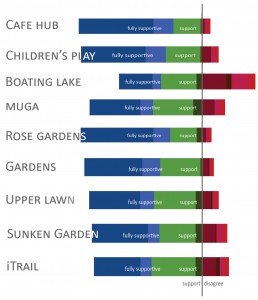 The strongest positive response, with 93% in support, is to use the cafe as a hub for life in the Park. Many commented on the huge success of the cafe and how it has already provided a much needed focal point for the community.

There is also very strong support (over 90%) for the renovation of the gardens, including the Rose garden. Comments made in support of these renovations show that the community wants the Park to be a well maintained green space full of colour.

The proposal for the children’s play area also generated much support with 87% in favour; supporting comments wanted to make this a priority.

One idea received much less support: 40% of responses were against moving the boating lake. 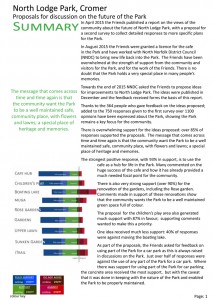 The full report contains details on the responses, and a set of 5 recommended actions.