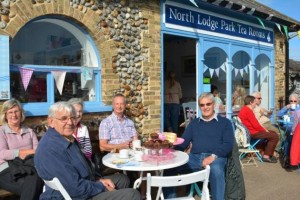 Cromer’s Friends of North Lodge Park are crossing their fingers that they will be picked to run the café they have revived and made successful.

Their bid comes at a critical time for the much-loved park, owned by North Norfolk District Council (NNDC) which is trying to attract a partner willing to invest in its attractions and facilities after a long period of stagnation.

The Friends believe a trust, in which it is a partner, should be formed to run the park.

Friends’ volunteers re-opened the café, rent-free, with NNDC’s blessing eight months ago. The council has been paying the business rates.

It attracts loyal regulars from the town and further afield, according to Friends’ secretary Barry Meadows.

Now NNDC is advertising for someone to operate it commercially, and pay £3,500 rent for a year from April 1.

“It’s been amazing,” said Mr Meadows. “The community is so grateful and supportive. The café is our focus. It’s where we meet the community and find out what’s going on. If we didn’t have that focus, it would make it much more difficult for us.”

The Friends will hold their annual meeting next week, on Wednesday March 23 at 7.30pm in Cromer Community Hall, Garden Street, when responses to their latest survey will be discussed. They are due to be published on March 18.

Mr Meadows said 364 people had answered a questionnaire asking for their views on suggested ways ahead for the park.

“The message coming across is that the community wants a park which is well maintained; a safe community place, with flowers and lawns – a special place of heritage and memories,” he added.

Respondents were divided over NNDC proposals to convert the former children’s play area into a 55-space pay-and-display car park.

“At the moment we are in limbo, and a bit frustrated,” said Mr Meadows.

“We need the café licence for another year and more information about the car park and the Prior Information Notice (NNDC’s advertisement for a partner to invest in the park).”

The Friends had earmarked money from the café for improvement projects which might include restoring the thatched collectors’ cabins by the sunken garden.