Friends of North Lodge Park, Cromer
We have formally lodged our objection to the planning application PF/16/1251 for a car park and new toilet facilities on the old children’s play area in North Lodge Park.The reasons for our objection are that it appears that North Norfolk District Council (NNDC) have submitted this planning application, without considering the Park as a whole, without addressing national planning policy and without addressing its own Core Policies. Furthermore, against the spirit of Localism and National Planning Policy, NNDC have put forward a proposal without consultation with the community. 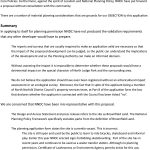 It appears that North Norfolk District Council (NNDC) have submitted thisplanning application, without considering the Park as a whole, without addressing national planning policy and without addressing its own Core Policies. Furthermore, against the spirit of Localism and National Planning Policy, NNDC have put forward a proposal without consultation with the community.

There are a number of material planning considerations that are grounds for our OBJECTION to this application.

In applying to itself for planning permission NNDC have not produced the validation requirements that any other developer would have to prepare.

The reports and surveys that are usually required to make an application valid are necessary so that the impact of the proposed development can be judged, so the public can understand the implications of the development and so the Planning Authority can make an informed decision.

Without assessing the impact it is impossible to determine whether these proposals would have a detrimental impact on the special character of North Lodge Parkand the surrounding area.

We do not believe the application should have even been registered without an arboricultural impact assessment or an ecological survey. Moreover, the fact that in spite of the applicant being a member of North Norfolk District Council’s property services team, at Part 8 of the application form the box that declares whether the applicant is connected with the Council has been ticked “no”.

We are concerned that NNDC have been mis-representative with this proposal.

The Design and Access Statement and press release refers to the site as Brownfield Land. The National Planning Policy Framework specifically excludes parks from the definition of Brownfield Land.

The planning application form states the site is currently vacant. This is incorrect.

The site is still open and used by the public to learn to ride bicycles, skateboard and informal play. Earlier this year NNDC erected signs forbidding skateboarding.  Part of the site has in recent years and continues to be used as a waste transfer station. Although no planning permission, Certificate of Lawlessness or Environment Agency permits exists for this use, NNDC have stated that it is permitted as it has been used for over 10 years. Part of the site is being leased to a Contractor for a construction site compound. It is not a vacant site.

If the area subject to this change of use application was not being used by a commercial waste operator and building contractors it could be more successfully used for recreational activities and events.

The application does not consider the designations that have been put in place by the Local Development Framework to protect this land.

Rather than Brownfield Land the designations that are ignored in the Planning Application are the fact that it is Open Space, Public Realm and in a Conservation Area. There are a number of planning policies relevant to these designations and the application either contravenes or does not demonstrate compliance with 11 policies of NNDC’s Core Policy and at least 9 clauses of the National Planning Policy Framework. These are examined in further detail below.

The design of the proposal is of low quality.

A plastic grid in-filled with an unspecified aggregate with plastic inserts, no specified kerbing and no margins or paths might be appropriate for an informal parking area but is not a considered formal design within a structured park and Conservation Area. No positions for signage, lighting, bins or street furniture have been proposed in the layout.

The proposal ignores the Council’s own standards

As well as ignoring its own Design Guide recommendations the Council have ignored their own published parking standards resulting in more spaces in the area than it can comfortably accommodate. The proposed parking spaces are smaller than would be permitted on a commercial development and there is no parking for motorcycles.

The dilapidated state of the existing area is being used as justification for this proposal on the basis that it is an improvement. The National Planning Policy Framework states that where there has been deliberate neglect, a state of dilapidation should not be taken into account in allowing permission for something that would otherwise be unacceptable.

Another justification promoted by NNDC is to increase the footfall to the East End of town but to achieve this a pedestrian entrance in the South West corner of the proposed car park would be required.

A surprising justification is to address a “wider concern that the town’s Victorian North Lodge Park was suffering from declining numbers of visitors”. The quality of the open space, its facilities and events attract visitors, and over the last 12 months the Park has been brought to life around the hub of the Café by the community which is currently being ignored by the District Council.

The Friends of North Lodge Park conducted a survey in March and April of 2015 that received 747 responses. The survey report concluded:

“The overwhelming view is that the special character of the Park as a beautiful, peaceful green space in the heart of Cromer should be safeguarded, and that the lawns and flower beds of North Lodge Park are an important asset to the town. Nothing should happen that is not in keeping with this special character. Respondents often spoke passionately about their fond memories of the Park throughout their lives and how it provides an ‘oasis of calm’, particularly at times when the town is very busy during the summer months.”

North Norfolk District Council know that introducing a car park into North Lodge Park is be an emotive subject with the Community and it is surprising that such a poorly documented and unsubstantiated application has been submitted that only addresses one aspect of the Local Development Framework and makes little attempt at addressing any material considerations that would justify a permission.

Any proposal for car parking in the Park needs to consider the Park as a whole, as a co-ordinated approach to this area of Public Realm and as a means of protecting and enhancing the recreational use of the Park.

The Council’s adopted Core Strategy Document states: “Applicants for planning permission should be prepared to demonstrate how the provisions of all relevant development plan policies have been taken into account”.

As the planning authority, NNDC’s own planning department must consider the relevant development plan policies and the decision must be taken in accordance with the development plan unless there are material considerations that indicate otherwise.

The details of our concerns can be viewed here.