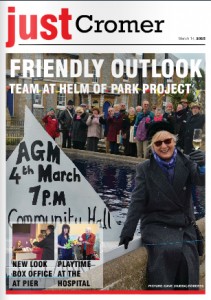 Nearly 100 people packed into Cromer’s Garden Street Community Centre on 4 March for the inaugural meeting of the Friends of North Lodge Park to “have their say” on the future of the Park.

“The Friends feel passionately about the Park, most of us remember when it was a lively place with lots of facilities,” said Friends steering group chair Carolyn Candish. “The formation of the Friends of North Lodge Park is the first opportunity for the community to be part of the decision-making process about what happens in the park.”

North Lodge Park is in the process of being transferred from NNDC to Cromer Town Council, and the meeting heard that Cromer Town Council had agreed a budget of £21,626 for the Park in 2015-16, with a £150,000 ‘dowry’ from NNDC also available. Concern was expressed by several people at the meeting whether the Town Council budget was sufficient as it seemed much lower than previous figures quoted by NNDC for running the Park.

“Assuming there are no further hold-ups, the transfer could take place by the end of March, “ said Carolyn Candish. “There won’t be an open cheque-book, but both the Town Council and the Friends will be able to apply for grants for specific projects.”

A widespread questionnaire consultation has been designed to start the process of collecting ideas to feed into plans for the Park. Launching the questionnaire, Tony Knight from the Friends steering group said: “The Friends’ key role is representing the views of the community, to be able to say ‘people want this’ or ‘don’t want that’ on their behalf.

“This questionnaire is very much a starting point in this process, an opportunity to collect ideas to help come up with a plan to discuss with the Town Council. “It will provide evidence of the feelings from the community”.

“It’s about looking forward and being positive. It’s a fresh starting point, a clean sheet of paper.”

The two-page questionnaire – available online and in paper form – is designed to provide a flavour of the sort of developments, if any, people would like to see in the Park.

Local people lost no time at the meeting to air some of their views during a lively half-hour open discussion, with memories of good experiences in the Park and a hope that the Park will be restored and properly maintained for future generations.

Local architect Bernard Smith said: “This is a new beginning for the park, and we’ve got to think of the youth of the future, so the park has to change. This is the beginning of a process, so let’s be positive.”

The results of the questionnaire will be used to develop plans with the Town Council when ownership of the park is transferred from the District Council, explained Carolyn Candish.

“Even though the transfer of the park is not yet complete, the Friends are up and running to represent the views of people in Cromer about what they want to see in North Lodge Park,” she concluded.

“Becoming a Friend of North Lodge Park will mean the chance to help develop its future, open up creative opportunities, and be a lot of fun.”

A Friends’ membership fee of £5 per household/family was also agreed at the meeting. The questionnaire can be completed online at northlodgepark.org.uk; paper copies are available from Budgens in Cromer.